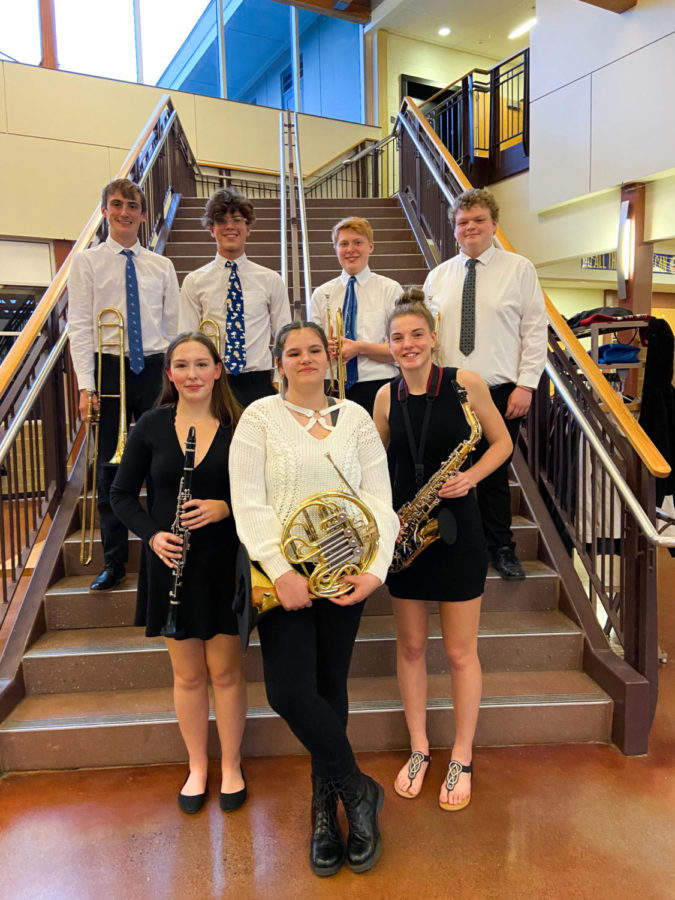 On November 2, the 2021 NWMA All Conference Band met at Northwestern High School. There were many students nominated and selected from different schools. However, this year was a bit different than previous years. There were four schools that participated – Northwestern, South Shore, Drummond, and Washburn. Typically, this ensemble is directed by a guest conductor, but due to uncertainties about possible changes due to COVID, this wasn’t the case this year. Instead, the four conductors from each of the participating schools each chose a piece to direct for the concert. The songs were intentionally easy to play compared to what is usually chosen. Again, this was done to ensure a performance even if many students and/or a conductor was absent due to COVID. The students who were selected from South Shore were: Ethan Bratley, Peyton Jardine, Sarena Kobie, Gracelyn Lovejoy, Kiley Mueller, Jacob Nollet, Maggie Ostrenga, Izzy Rantala, Carter Ray, Lily Truchon. Of these people, Ethan, Sarena, and Kiley couldn’t go for either personal reasons or due to COVID exposure.

The four pieces and their conductors were as follows: “Washington and Lee Swing,” directed by Jodi Truchon from South Shore, “Two Celtic Folksongs,” directed by Rick Seppa from Washburn, “The Rowan Tree,” directed by Quint Schultz from Drummond, and “Highlights from Harry Potter,” directed by Michael Hintzman from Northwestern. The students started rehearsal at Northwestern at 10:00 AM, and they were given the sheet music for the pieces for the first time. They practiced these songs all day (with breaks about every 45 minutes, plus a lunch break). Then, they performed the concert at 5:00 PM. The concert was free of charge to attend, and many parents of the students came to watch. The concert was also streamed live on YouTube, and is still up for anyone to watch at any time.

Here is the link to the performance: https://www.youtube.com/watch?v=cb1yLti8tEc

This was a great experience for the students, directors, and parents/community members. This was the only day that this ensemble existed – there will never be the same students playing together again, which makes this performance even more special. Being able to come together from different schools and create beautiful music, and also experience different conducting styles, is an amazing experience for the students. South Shore’s director, Jodi Truchon, said this about the event: “The band directors in the Northern Wisconsin Music Association made a decision to change how All-Conference Band would look this year due to our current pandemic situation.  Even though we made these changes, the outcome of the event was as good or even better than previous years and I am so proud of our students for being willing to participate and do their best.  The concert at the end of the day, as well as the whole experience leading up to it, was outstanding!”