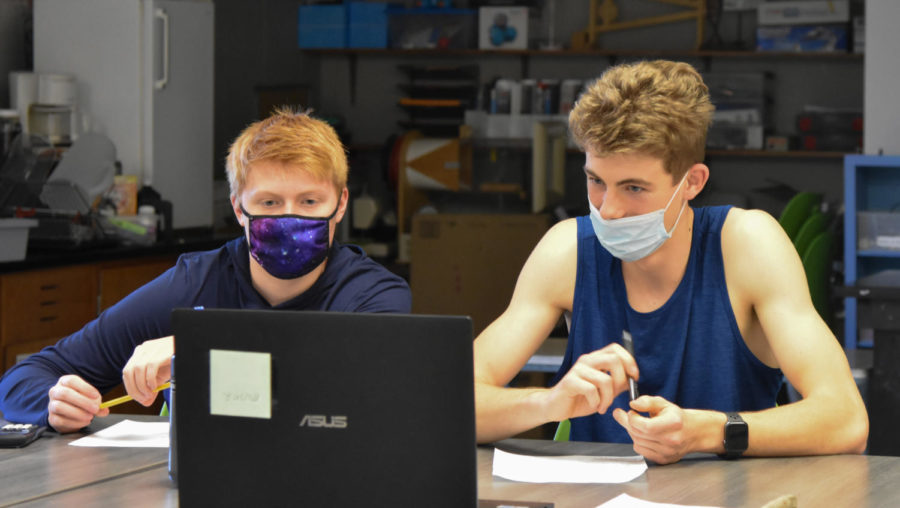 On Thursday, November 4, the South Shore High Quiz Bowl team took on Drummond. Quiz Bowl isn’t like most sports where one team has to travel to the other school. The whole match is done on Bluejeans, a video-conferencing app similar to Zoom. Each school creates a team of up to 4 people for a match. Then both schools join the Bluejeans meeting, where the match moderator is waiting. For this match, the moderator was Christine Engfer. The players for South Shore for this match were Izzy Rantala, Caden LaFontaine, and Kyla Smith.

Once everyone is ready, the match begins. The moderator starts it off by asking the designated ‘home team’ the first question. This match’s home team was Drummond, so they started off with the first question. The match continues with each team being asked a question. The way points work in Quiz Bowl is if a team answers a question correctly, they get 5 points. If a team answers their question incorrectly, they get -5 points. (Yes, a negative score is possible! Though, rarely for South Shore.) If a team is given a question and doesn’t know the answer, they can pass the question to the other team without affecting their score. The other team can then ‘steal’ and attempt to answer the question that was passed to them. If they answer correctly, it’s 5 points for them, and if they answer incorrectly on a passed question, there is no penalty.

Because of these rules, South Shore typically goes with the strategy of guessing something on every passed question, (instead of not giving an answer,) and passing our questions if we are uncertain. This keeps us out of the negatives, and gives us a better chance of getting extra points on passed questions.

This match was very close for the majority of the time. Both teams were gaining points and hardly losing any in the first round. At the end of the first half, Dummond was ahead by 15 points. Then, in the second round, Drummond started to fumble. They got four questions wrong in the second round. South Shore played strategically and slowly took the lead. At the second-to-last question the score was 70-55. South Shore got their first and only question wrong at this point in the match. Drummond got the last question right, making the score 65-60 at the end, with South Shore ahead by 5. However, Drummond decided to challenge a question that they had gotten wrong. Teams can challenge questions they feel they answered correctly, despite it not being the written answer that the moderator has. Drummond challenged a question about historical artifacts, where the answer was ‘coins,’ but they said ‘currency.’ This question was challenged and the moderator made the decision over the weekend that Drummond got the question correct. This means that Drummond barely wins the match with a score of 70-65, making this the closest match South Shore has played this year.