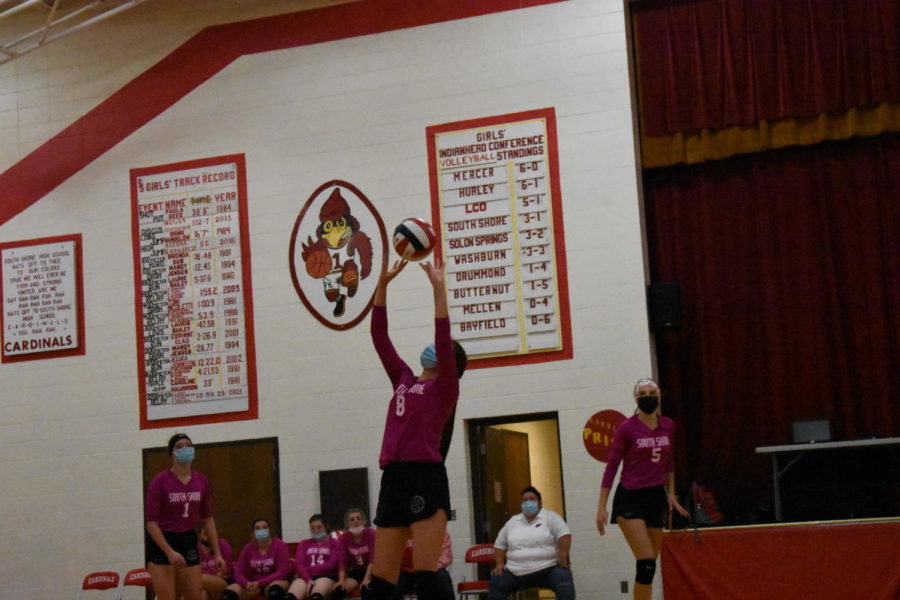 On October 6, the South Shore high school volleyball team competed in a home game against the Mellen Granite Diggers. This night kicked off the start of home games during Breast Cancer Awareness Month. The team wore their pink jerseys to support this cause and donated raffle items to be advertised at the door to raise money for the Berni Gustafson-Klobucher Memorial Fund. The night began with a JV game, which was best of 3 sets. The Cardinals took the first and second sets with scores of 25-22 and 25-17. The South Shore and Mellen JV teams didn’t have the opportunity to play many games so far this season, so they agreed on playing a third set just for fun. This last set ended with South Shore on top and a score of 15-13.

Next up was the varsity game, which was best of 5 sets. This game made an appearance on the KBJR6 news because of South Shore’s promising season. South Shore and Mellen had already met twice this year and South Shore took the win both times. The game began with a 7-1 run for South Shore thanks to Kiley Mueller’s killer serves. The South Shore varsity team won the first two sets with scores of 25-18 and 25-10. Mellen made a comeback in the third set and bested South Shore with a score of 26-24. The crowd went wild as the fourth set began and both teams came out firing. Everyone played their best but South Shore came out on top with 25 points, compared to Mellen’s 14 points. Beau Reijo led the team with 10 kills, Emily Montgomery had a total of 4 blocks, and Leila Tuura had 35 assists. This win gave the South Shore varsity team a conference record of 4-1 and a season record of 14-3.