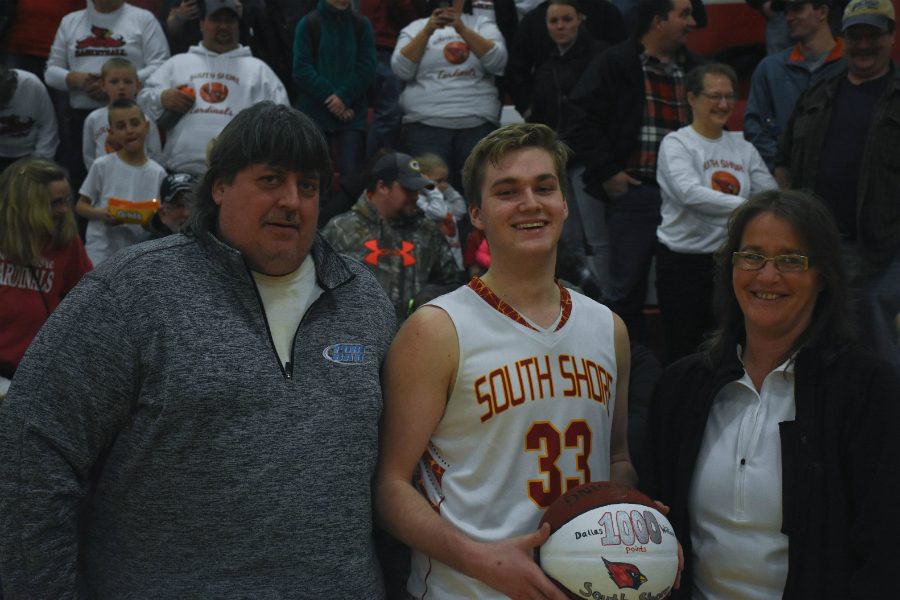 6…4..3…1000! These were the words of the crowd as they counted down the points until Dallas Williams hit his 1,000 career point mark. On Feb. 13th, the guys took on the Drummond Lumberjacks in a big game. The South Shore Cardinals already had the 2018 conference championship in their possession, but Drummond has been the hottest playing team during these past couple weeks and was a potential threat to the Cardinals’ record. The Cardinals, however, swept the Jacks in a 57-27 victory, proving their skills on the court.

During the second half of the game, Dallas hit a three to thunderous applause as he made history in front of a crowd that had swelled to accommodate parents, who were recognized for their commitment to their student athletes and the athletic program at South Shore.   Dallas had an additional 17 points for the evening, to finish the game with a total of 20 points. This is a big milestone in a high school basketball player’s career. Dallas has been an outstanding player throughout his four years of basketball. He has been a starter since he was a freshman and has played a huge role in the team since. Matt Bailey, his coach, stated that Dallas has put in work and this honor was greatly deserved. “It has been a pleasure coaching Dallas these last two years. All of the extra hours spent in the gym have allowed him to have a great career. This accomplishment was well deserved.”

This year we have had not one but TWO players hit this huge accomplishment. The staff, students, coaches and community members are all honored to play a part in these two players’ journeys. Dallas Williams, Connor Sorenson and the rest of the team play in Spooner on Monday, Feb. 19th. We wish luck to the guys on the rest of the season and in the tournaments!