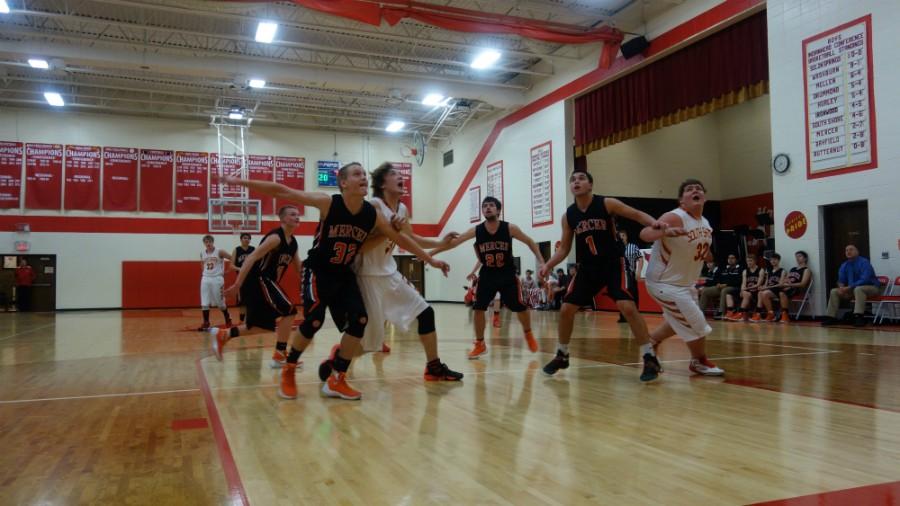 Seniors Adam Ranta & Zachary Hipsher box out early in the game against Mercer to keep the Cardinals in the game.

"Dress Like A Cardinal!" from Brigid J. Ripley on Vimeo.

South Shore basketball fans braved some freezing temps and treacherous weather conditions to attend the double header with Mercer on January 29.  It was a great game to attend too!  Midland Services rolled out their Cash for Kids program with representatives Jessina Lehto and Katy Kangas encouraging attendees to sign up for a raffle to win one of two $50 gift cards, half time games that pitted several attendees against one another in a battle to see who could dress like a cardinal the fastest and an intense final 45 seconds that had to have lasted five minutes made for a memorable evening.

The girls started off the games first with an easy victory over the Tigers with a final score of 37-17.  Their game was quickly followed up with a bit of full court shenanigans when Alexandra Armbruster raced her stocking-footed opponent Matthew Knaack, Sr., for a chance to win a walking taco.  Her falling fumble only added to the delight of the crowd who were happy for her victory.  Sara Kangas gave Nick Botosh a run for his money but came up just short, blaming the furry footies.  “I couldn’t even get the feet on!”  Ah well, better luck next time!  Drawing for the gift cards went to Mrs. Julie Branham and – perhaps with some chagrin to Mr. Gustafson, who drew the name – to Mrs. Eva Gustafson!  Indubitably, he will be taking some good-natured jesting about that for some time to come.

The boys battled hard and came out on top in overtime.  Hayden Suo had the crowd on their feet with a buzzer half court swish that will undoubtedly be talked about long after he graduates.  And thanks to Dallas Williams’ three-pointer at the buzzer, the Cardinals saw certain defeat fade into another opportunity to take back the scoreboard.  They didn’t disappoint!  Final score was 73-71.