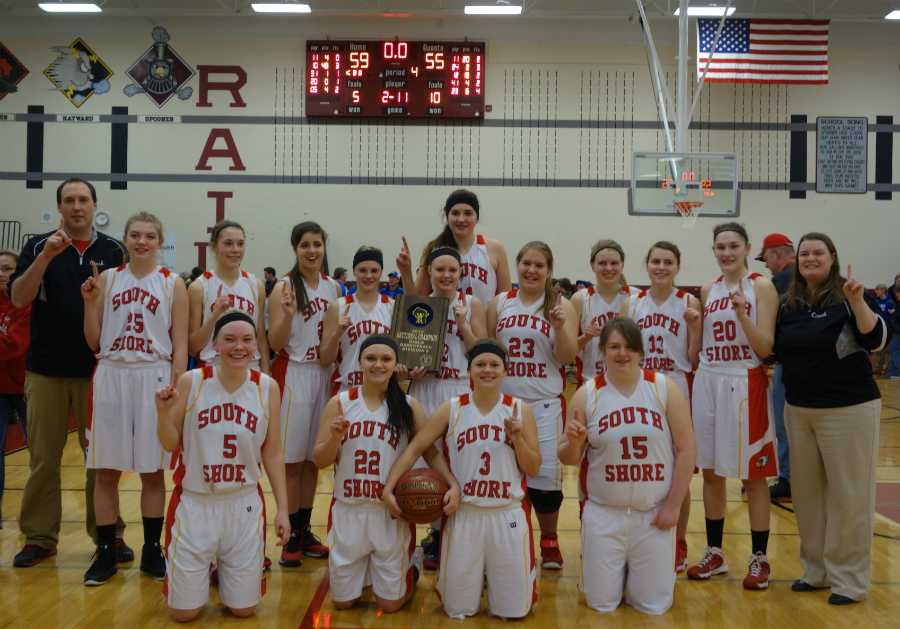 The 2015 South Shore Cardinals have fought a long season and their heart-stopping 59-55 victory over McDonell this afternoon at Spooner just awarded them the trip of a lifetime.  The Lady Cardinals are going to State!  South Shore will face off against Assumption (24-3) for the first of two rounds for the Wisconsin Girls Basketball State Championship.  The game will be held on Thursday, March 12 at 3:15 in Green Bay at Resch.  The winner of that game will play again on Saturday, March 14 at 11:05.

The Cardinals have an impressive 25-2 standing and their game today was all heart and skill.  The first three minutes remained scoreless with our opponent racking up a quick succession of fouls.  Things quieted down once the Cards put up the first shot, Gustafson sinking a free throw to make it 1-0.  Much of the game was answering basket-for-basket, but the Cards were able to eek out a healthy lead by the second quarter, at one point leading the Macs by 12 points.  That wouldn’t last for long however.  The Mac crowd was fierce, encouraging their players’ every move.  The Macs rallied to tie up the game 43-43 with less than a minute left in the third.  Again, the Cards played tough to open up another single digit lead which the Macs were able to eat up with a series of impressive threes.  With less than four minutes remaining, the score was 55-53.  The blue clad Macs went positively wild when their last shot tied up the game and this spectator definitely started to sweat!  The Cards remained strong, holding off McDonell for a 59-55 victory.  Congratulations, ladies!  Can’t wait to see ya’ll at State!  And best of skills.